Nowruz is the traditional Persian festival of spring which starts at the exact moment of the vernal equinox, commencing the start of the spring. The name comes from Avestan meaning “new day/daylight”. Nowruz is celebrated March 20/21 each year, at the time the sun enters Aries and Spring begins.

Nowruz has been celebrated for at least 3,000 years and is deeply rooted in the rituals and traditions of the Zoroastrian religion.

The festivities begin with the celebration of the night of ChaharShanbe Suri. It is celebrated on the last Wednesday of the old year to get rid of all the bad luck and misfortunes of last year. People generally light small bonfires and jump over the flames shouting ‘Zardie man az to, sorkhie to az man’ meaning ‘May my sickly pallor be yours and your red glow be mine’. And Haji Firooz, who on the last Tuesday of the year, were sent by the white-dressed priests (Moghs) to spread the news about the arrival of the New Day.

The traditional herald of the Nowruz season is called Haji Pirooz, or Haji Firuz. He symbolizes the rebirth of the Sumerian god of sacrifice, Domuzi, who was killed at the end of each year and reborn at the beginning of the New Year. Wearing black make up and a red costume, Haji Pirooz sings and dances through the streets with tambourines and trumpets spreading good cheer and the news of the coming New Year.

Haji Firouz represents the red-dressed” fire keepers” of the Zoroastrians. The Fire keeper’s second duty was to call on the people to burn their old items in the Fire, and to renew their life and regaining health by obtaining the solved energy of the Fire. The dark color of the Fire keeper’s face is allegedly caused by the heat of the holy fire. Fire keepers use of rather unfamiliar expressions combined with their humorous nature, brought laughter to people’s faces.

My master, hello
My master, bring your head up
My master, look at me
My master, do us a favor
My own master, the billy goat
My master, why don’t you laugh 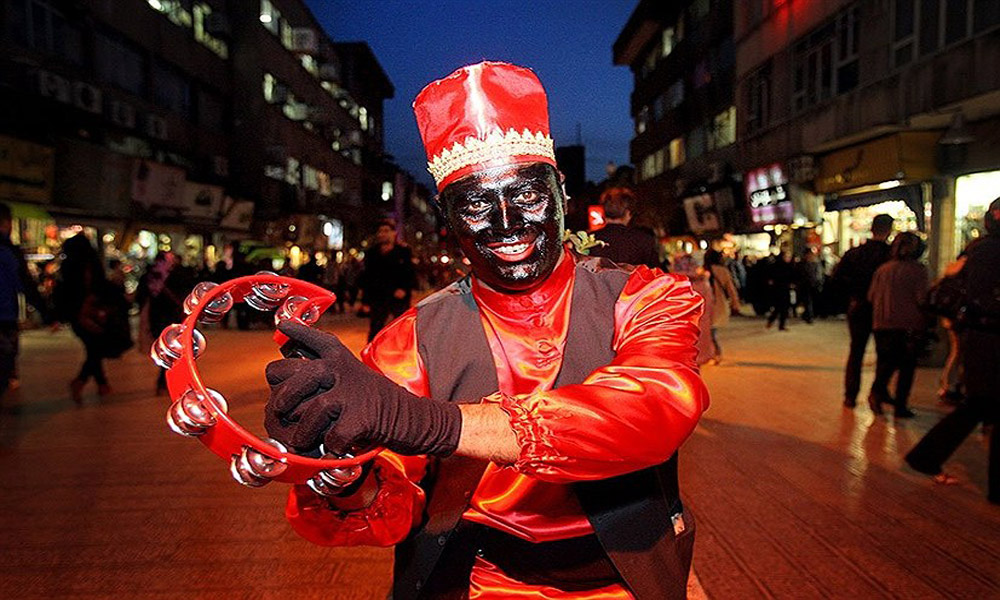 The Celebration of Nowruz

On the first day of Nowruz, family members gather around the table, with the Haft Seen on the table or set next to it and await the exact moment of the arrival of the spring. At that time gifts are exchanged. Later in the day, on the very first day, the first house visits are paid to the most senior family members. Typically, the younger ones visit the elders first, and the elders return their visit later.

The table is set up with Quran, the Holy Book; a bowl of gold fish; mirror; candle; flowers; painted eggs and seven traditional Persian dishes each starting with the letter ‘s’. This table is kept in the home for thirteen days after the start of the holiday. The seven traditional Nowruz foods are:

A traditional Nowruz dinner is called Sabzi Polo Mahi which is a rice dish with whitefish and green herbs like parsley, coriander, chives and fenugreek. At the end of thirteen days, Sizdeh Bedar is celebrated which means ‘getting rid of the thirteenth’. The green sprouts grown during the holiday are thrown into rivers or lakes to symbolize the plants return to nature. This marks the end of the festivities.

Nowruz is a time for spring cleaning, buying new clothes, visiting friends and relatives. On the 13th day of the New Year, the celebrations finally end. During the Nowruz holidays people are expected to pay house visits to one another (mostly limited to families, friends and neighbors) in the form of short house visits and the other side will also pay you a visit during the holidays before the 13th day of the spring.

The thirteenth day of the New Year festival is called Sizdah Bedar (meaning “thirteen outdoors”). It often falls on or very close to April Fool’s Day, as it is celebrated in some countries. People go out in the nature in groups and spend all day outdoors in the nature in form of family picnics. It is a day of festivity in the nature, where children play and music and dancing is abundant. On this day, people throw their sabzeh away in the nature as a symbolic act of making the nature greener, and to dispose of the bad luck that the sprouts are said to have been collecting from the household.

The thirteenth day celebrations, Seezdah Bedar, stem from the belief of the ancient Persians that the twelve constellations in the Zodiac controlled the months of the year, and each ruled the earth for a thousand years. At the end of which, the sky and the earth collapsed in chaos.

Nowruz was inscribed on the UNESCO list by the 11th Intergovernmental Committee for Safeguarding Intangible Cultural Heritage held in Addis Ababa, Ethiopia, from November 28 to December 2. UNESCO recognized Nowruz as part of the Intangible Cultural Heritage of Humanity on September 30, 2009, based on an initiative undertaken by Iran, India, Azerbaijan, Uzbekistan, Kazakhstan, Pakistan and Turkey. In 2014, five other countries: Iraq, Turkmenistan, Tajikistan, Afghanistan and Kyrgyzstan asked to join the project which led to a review of the case and resubmission of the proposal to UNESCO.