For centuries, Mesopotamia was thought to be the world’s oldest civilization. This was generally accepted by most people until a 5,000-year old temple was discovered in Jiroft Historical Site in Iran’s southern Kerman province, prompting archaeologists to identify the region as the world’s oldest cradle of human civilization.
A hundred and twenty historical sites have been identified in the basin of a 400 kilometer stretch of Halil-Rud River in the south of Kerman province. One of these is at Konar Sandal (sites A & B),
two mounds a short drive from Jiroft town-center. Jiroft is 230-kilometres south of the city of Kerman and was previously known as Sabzevaran, a name that describes the verdant fertile valley plain of the Halil River. Indeed, the plain by Iranian standards is so green and fertile that it is called ‘Hend-e Kuchak’ meaning little India. Jiroft is also one of the hottest towns in Iran. A temperature of 57 °C / 135 °F was recorded in August 1933.
Not far from Konar Sandal, flash floods from the Halil River in the year 2000 swept away the topsoil revealing yet another site, this one consisting of a large number of ancient graves. The excavations at Konar Sandal site have also revealed the ruins of a city a kilometer and a half (about a mile) in diameter. 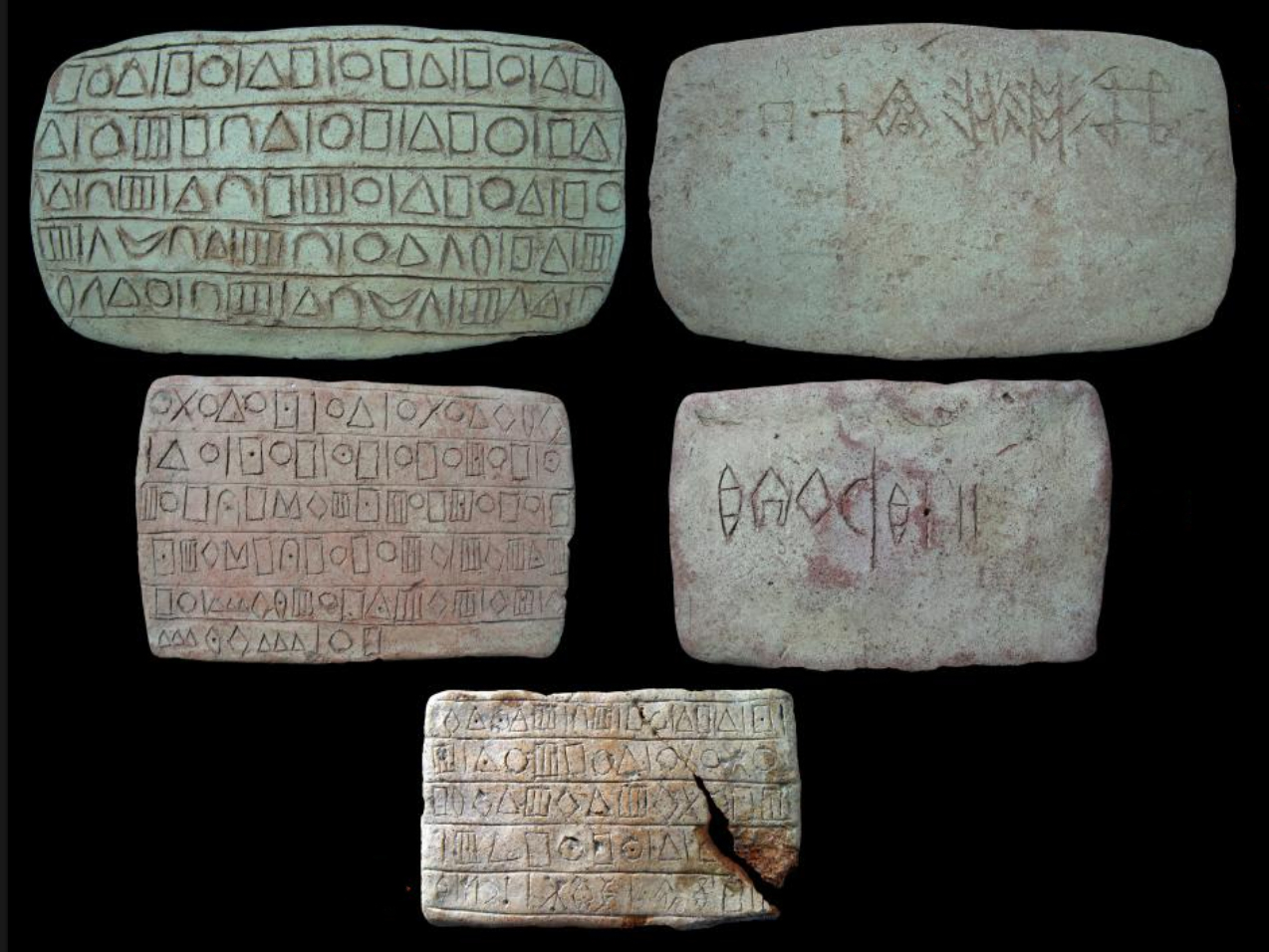 The ruins of the ancient settlements at or near Jiroft are said to have been home to a people who inhabited the area in 2200 or 2300 BCE – an era in history when writing first began to flourish and traders carried spices and grain, gold, lapis lazuli and ideas along the Aryan trade roads that radiated from Central Asia to the Nile, Indus and China.
The mounds or tepes at Jiroft are also called “Qal’eh Kuchak” meaning little head. In addition, there are the two mounds, site A that is said to be a ziggurat-like structure 17 meters (54′) high and 400 meters (1280′) on each side at the base, and site B that is said to be a two-story citadel with a base covering nearly 13.5 hectares (33 acres) surrounded by a fortress wall 10.5 meters (34′) thick. A ziggurat suggests a pyramid-like structure consisting of tiered platforms, and a citadel suggest a fortified building. The two sites A & B are a couple of kilometers apart

French geomorphologist Éric Fouache, an expert on reading the strata underlying the archaeological sites, has discovered a network of artesian wells that would have supplied abundant water for irrigation and drinking even when the Halil River ran dry. With these sources of water, the inhabitants developed an agriculture based on date palms and Palm groves provided shade for further planting.

Chris Sloan at the National Geographic blog site writes, “And at the “citadel,” Konar Sandal B, archaeologists have uncovered a life size, or larger, human figure sculpted from mud or mud brick.
It had been painted to look like it was wearing a feline pelt. If this sculpture is associated with Bronze Age layers, it will be among the earliest of such figures in the world. Unfortunately, it is missing its head. The earliest known statue of this sort from Egypt, and I believe the world, is from Hierakonpolis. It dates from 3000 B.C, It is also incomplete, but in much worse shape and It is in over 500 pieces.”

The artefacts found include twenty-five two to five centimeter (7/8″–2″) long stamp and cylinder seal impressions that depict bulls, ibex, lions, snakes, human figures – and writing. It should be noted that some of the finds related to ‘writing’ are thought by other archaeologists to be forgeries.
Other finds are a large number (tens of thousands) of carved and decorated vases, cups, goblets and boxes made from a soft, fine-grained, durable gray-greenish stone called chlorite

After the floods in 2000 revealed the site and its artefacts, local farmers looted what they could find and sold them to unscrupulous dealers for a pittance.
The looters work by digging indiscriminate holes or digging up graves which are rich in buried artefacts. It is estimated that there are 10,000 holes dug by the looters – craters that scare the landscape.
It was only in the fall of 2002, that the Iranian government stepped in to halt the looting and seized hundreds of stolen artefacts. However, despite the crackdown on pillaging and the hiring of a dozen armed guards, sadly, theft at Jiroft still continues and local rumors abound about the looting of gold and other priceless items.Even when stolen artefacts are recovered, many will have been damaged irreparably by the careless removing of caked on soil. Their contextual identity will also it all probability have been lost. Because the artefacts were removed from their setting and the attached material that could have been dated by scientific instruments removed, the history or information these treasures have may have carried with them will, sadly, be lost forever.

The large number of chlorite artefacts discovered lends itself to the theory that Jiroft had several prolific chlorite workshops that manufactured the items in quantities that exceeded local demand and were prepared for export. Indeed, chlorite vessels similar to those found at Jiroft have been found from the Euphrates to the Indus, as far north as the Amu Darya and as far south as Tarut Island, on the Gulf coast of Saudi Arabia. While there is nothing at present to directly link the Jiroft artefacts with the others, there is certainly the possibility of a link. Perhaps the link can be explored and established by finding common styles. The Jiroft artisans had a unique naturalistic design style.
Chlorite is a stone similar to steatite and soapstone. It is durable but soft enough to carve easily, and fine-grained enough to hold carved details well. Its color ranges from jade green (which gives it its name) to smoky gray, to black as obsidian. While there are chlorite deposits in mountains across Iran, only one ancient chlorite quarry has been found in Tepe Yahya some 90 kilometers (50 miles) from Jiroft. The other old chlorite quarry that has been discovered in the region, is on Tarut Island – an island located across the Persian Gulf along the Arabian coast (near present-day Bahrain and some 800 kilometers east-south-east of Jiroft).

The trade links between Jiroft and all the centers along the Aryan trade roads is further indicated by the discovery of objects inlaid with lapis lazuli (likely from Afghanistan), carnelian (possibly from the Indus Valley), and other semiprecious stones not local to the area. Marjan Mashkur, an Iranian researcher based in Paris, discovered at Jiroft shark bones and shells that appear to have been brought inland from the Gulf which is some 200 kilometers (120 miles) of the south of Jiroft.
In addition to items made from chlorite, the Jiroft artisans also made pink and orange alabaster jars, white marble vases, copper figurines, beakers and a striking copper basin with a eagle seated in its center, as well as realistic carved stone impressions of heraldic eagles, scorpions and scorpion-women.

The Ancient Civilization of Jiroft