Taq-e Bostan ( in Kermanshahi Kurdish  “ Taq Ve Saan” with the meaning of the Arched made by stone)  is a collection of petroglyphs and Sassanid inscriptions that are located in the west of Iran and northwestern of Kermanshah city. This complex was built in the third century AD and has many historical and artistic values. Some Historic scenes, such as Khosrow Parviz Coronation, Artaxerxes II’s coronation, the second and third Shahpur coronations, and also some inscriptions by the line of the Pahlavi inscription are carving inside it. The existence of mountain and the fountain inside this place made there as a cheerful walkway that has been considered since the long times ago until today.

Taq-e Bostan in the Kermanshahi Language (Kurdish) is “ Taq Ve Saan”. “Taq”  is with the meaning of  “vault”, “Ve” is “from” and “Saan” is the stone. And in this way, “Taq Ve Saan” means the “Stony Vault ”. This complex was built in the third century AD. Sassanid kings first chose the area around Persepolis to shave their sculptures, but from the time of Artaxerxes II, and the kings after him, they chose Taq-e Bostan either that was located between the way of Silk Road with the Green and full of water nature. 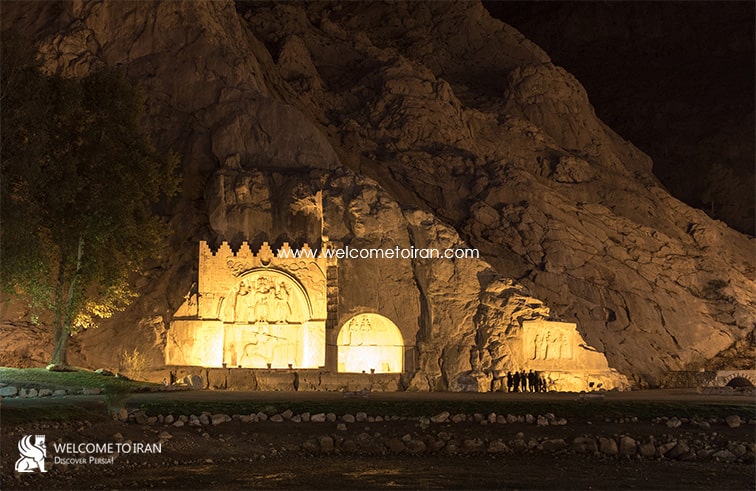 Taq-e Bostan royal hunting ground Petroglyph is the first stone panel with the accordance with the rules and principles of painting that counts in the world. In this carvings, Khosrow ride on Shabdez is on the way that you think the effect has come from the other paint. Also in the large vault, there are some effects from the women musician whom they are busy on playing the harp and wind instruments. In the other part of the large vault, the Boar hunting scenes have to be seen that it is from the movement and the show is among the masterpieces of the art of petrography that is in the way of Art near the art of painting on the wall.

With the analytical study in the reliefs of the Taq-e Bostan, the colorful dress of the ride has been woven with golden threads and they have rhombic style and the decorated is perfectly geometrical. In the Boar hunting scene, the king has a clothing on his body that has decorated with the role of the Simorq in the circular signs. The clothes of Rowers have also dramatic roles. In a prominent role in the lateral wall of Taq-e Bostan, ceremonial Ornaments of the king robes, who sits on the throne inside the central of Shamma carving in the glaze form of crystalline and with the variety of the gold Embroidered and Embroidered flowers near each other, has great decoration and the clothes of followers and elephant rides has Hand sewing with plants and birds paintings. 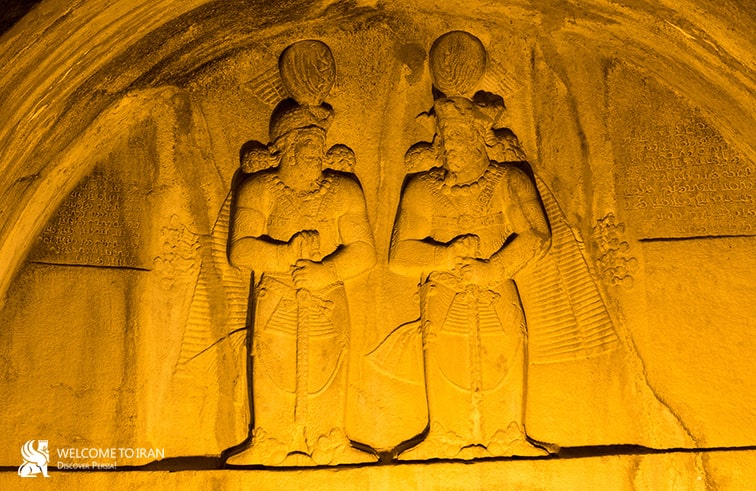 This relief is the first reliefs of the Taq-e Bostan that is located near the small vault. There is a Petroglyph in the right hand of the small vault that shows the scene of the coronation of Artaxerxes II  ninth Sassanid king.  In this scene, the Sasanid king with the standing mood, three quadrant face and all ROC body painted in the central of the scene that the left hand is on the Hilt and with the right hand gave the Ribbon ring from the Ahuramazda, while Zoroaster or we can say Mitra with the Halo of  light is located on the left hand behind him. Under the foot of Artaxerxes II, Roman emperor Julian whom he is captured in the war is located. Sassanid king has large eyes with the prominent eyebrows. He has the curly beard and he has in bulk hair that Hung on his shoulders. He has Earrings on his ears, a necklace on the neck and bracelet on the wrist. His Earrings are in the shape of the circular ring and small balls are hanging from them. Also, his Necklaces has a row of coarse pearl beads.  Evidently Amesha Spenta was the interface among human and Ahuramazda , and Hooman (Bahaman) what we read in the excerpts Zatsperm : (( Hooman carried Zoroaster to the high beautiful sky that all of it was the bright, it was the Eternal Light and Topless, it was Ahuramazda as a pure light. )) So the picture behind the head of Artaxerxes II is Amesha Spenta and Hooman. 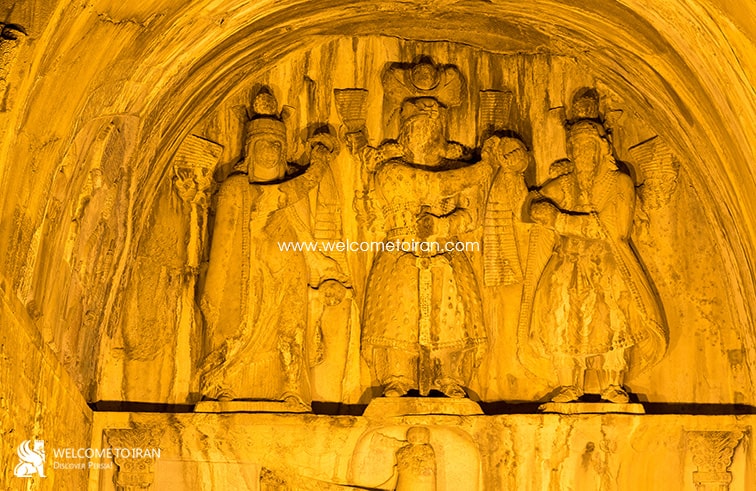 The most important effect in the Taq-e Bostan is the Great vault with the Petroglyph of Khosrow Parviz coronation that it has a porch with the rectangular space (seven meters and eighty-five centimeters width , eleven meter and ninety centimeters height , seven meter and sixty five centimeters depth) that is located near the entrance of the vault, Petroglyph of winged angels, life tree , Boar hunting events , hunting birds and fish in the marsh and the paints of elephants, horses, and boats that they are suggests feasting and happiness ceremony.

Under the paint of  Khosrow Parviz coronation, armored riding on horseback is located.

In this picture, the king is among and Forouhar is located on the right hand of him. Forouhar has the jagged crown on his head and gives the Izadi far ring to the king. King garments (Shah garments) and image of Forouhar are partially identical. Both of them have corrugated pants on foot that they are sticking to their ankle by wrapping. Also, both of them have the belt and a bracelet. Mitra is located on the left hand of the king.

You can see three statues in the great vault. The king is among, Forouhar is on the right hand of him that is like the Artaxerxes II’s coronation and Anahita is on the left hand of the king. Anahita is the Goddess of water and symbol of Flourishing and greenery. 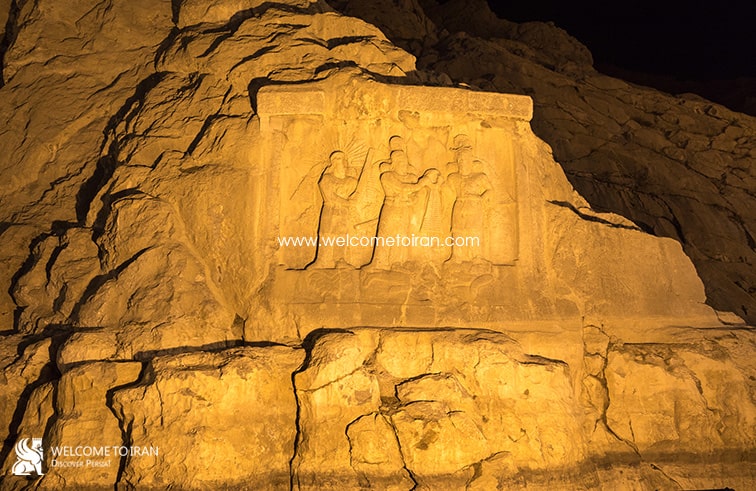 The small Vault is located in among of coronation petroglyph of Artaxerxes II and the great vault and it has rectangular space with width of five meters and eighty centimeters and the height of five meters and thirty centimeters with the pictures of coronation ceremonies of second and third Shahpur, This vault has two figure in the top wall of the vault and two Epigraphs. These Epigraphs are in the Line of inscription Pahlavi.

Unfortunately, in the period of Qajar, some manipulation have been made on top of this very exquisite carvings panel and they have carving images and had Great damages to Taq-e Bostan . The picture of the one selfish king in the Qajar period that he wanted to have one memento from his self under this vault.  This carving shows the status of the Mohamad Ali Dolatshah the son of Fath Ali the king of Qajar. This picture is very inappropriate and worthless.

There were the building related to the Qajar era in around of the Taq-e Bostan until 1342 that were known to the Masoudieh Mansion that was built by Imam Quli Mirza imadudole and was destroyed to indicate the artefacts and dumping Anahita fountains.

Because of the movement of the ground in this part cracks were appeared in the large and small vaults that over time, and with gathering moss on the walls of that they cause fade part of the designs in these vaults and because of gathering the water in the gaps this process has resonant and make the archaeologists think about repair of the mansion.